The Reserve Bank of India governor, D Subbarao, addressed a joint conference of the FICCI and the Indian bank Association (IBA). He started the speech acknowledging that he is talking to two important segments of the economy which play a major role in its development.

The theme of the conference was 'Global Banking: Paradigm Shift'. The Governor's entire speech focus was on “Corporate Governance of Banks in India". Subbarao said that he believes that more effective and enlightened corporate governance of Indian banks will be vital for improving banking productivity.

The governor accepted that the business of banks is leveraged by nature as the bank accepts public funds and then gives it out on credit. So it is this depositors base that sets the bank different from other corporates. If a corporate goes bust then only the shareholder will stand to lose. If a bank goes bust then its shareholders and the depositors will lose out in immediate announcement and this will have a contagion effect. This can affect the entire financial system and the macro economy.

Informing the industry and the government on why the banking regulator needs to have a hawkish approach Subbarao said, "Among the many lessons of the crisis is the one that financial markets are not self-correcting. This is in part because the signals of financial instability are difficult to detect in real time. On top of that, banks escape some of the disciplinary pressures of the market as their balance sheets are typically opaque."

Reminding the important place that financial institutions have the governor reminded all its listeners "Given the centrality of banks to modern financial systems and the macro-economy, the larger ones become systemically important. That raises a moral hazard issue since systemically important banks will then indulge in excessive risk in the full knowledge that all the gains will be theirs; and should the risks blow up, the government or the central bank will bail them out and thereby the losses can be socialized."

From there on the governor said that the risks and vulnerabilities of the financial system are not just text book concepts, they are all highly probable real world eventualities.

He said that the Institute of International Finance, an association of major international banks, has concluded after an examination of board performance of banks in 2008 that, “events have raised questions about the ability of certain boards to properly oversee senior managements and to understand and monitor the business itself".

Click on the topics given below to read D Subbaroa's, RBI Governor, view (verbatim) 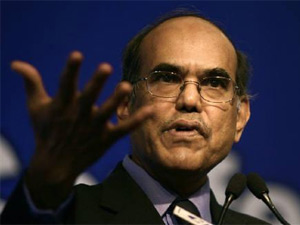