On Friday, RBI data revealed that India's CAD or current account deficit jumped to $13.5 billion which amounts close to 2% of the GDP during the third quarter of 2017-18 against $7.2 billion in the quarter ended September. CAD figure for the October-December period in FY 2016-17, stood at $8 billion.

Current account deficit (CAD) is the excess of country's imports of goods and services over its export. The ballooning of CAD is primarily attributed to increase in crude oil prices and higher import of electronic goods. 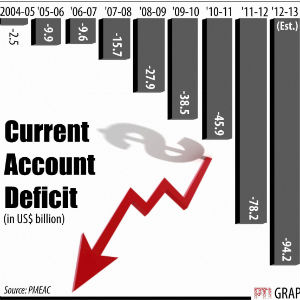 Why is high CAD bad for India?

The high CAD figure augurs bad for the economy as it leads to the free fall of domestic currency, hurts stock market sentiment, results in inflation etc.

"The widening of the CAD on a year-on-year (y-o-y) basis was primarily on account of a higher trade deficit ($44.1 billion) brought about by a larger increase in merchandise imports relative to exports." Crude oil and other petroleum products account for over 40% of the total merchandise import of India.

Services is another major component and as per the RBI, net services receipts increased by 17.8 percent on a y-o-y basis mainly on the back of a rise in net earnings from software services and travel receipts.

"Private transfer receipts, mainly representing remittances by Indians employed overseas, amounted to $17.6 billion, increasing by 16 percent from their level a year ago," the RBI said.

The overall balance of payments (BoP) after considering current account and capital account ended in a surplus of $9.4 billion due to $22 billion surplus in capital account.