Telangana is the newest state in India, which was formed only on June 2, 2014. It was carved from the state of Andhra Pradesh. Hyderabad is the capital of the state. It has a very dry and hot climate with temperatures that may soar to as much as 42 degree celcius in the summer. Agriculture is the main activity of the state that drives its economy. Krishna and Godavari are the two rivers that run through the state.

Telangana has a number of pharma and renowned hospitals, including Apollo Hospitals and Dr Reddy's. Besides this the state also has industries related to poultry farming, bio-technology and horticulture. The government is in the process of developing a number of industries and giving a thrust to IT. It is planning to attract a lot of FDI into the state.

India is a country which is famous for its tradition and culture. In every few festivals are being celeberated in great manner from many years. Tourist from around visits telengana during specfic festival times to spectate the celebrations. 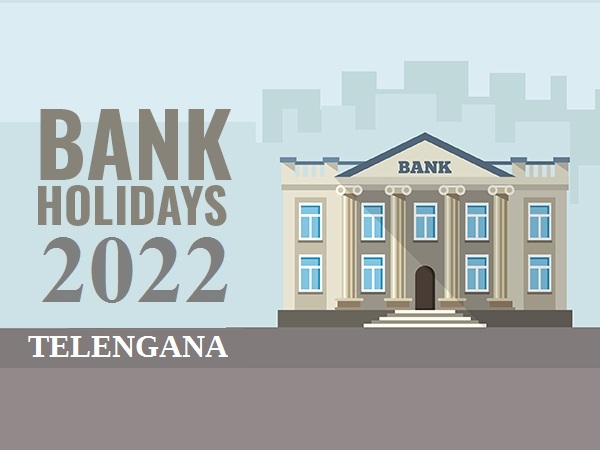 Ramadan - Ramadan is celebrated very grandly specially in the old city of hyderabad. A special dish called haleem is prepared in hyderabad. To taste this dish people from around the world visit hyderabad. Ramadan is a bank holiday in Telengana. On the occasion of ramadan to offer prayers a huge crowd comes up every year.

There are other festivals which are also clebreated in a great manner every year in telengana which includes batukuamma and bonala. But these festivals are not bank holidays in Telengana. Batukuamma is nine day festival. This festival is famously known in India as Dussherra.

Banks will be closed for nearly 90 days every year including Sundays, Second and Fourth Saturdays there are holidays in Telangana which are not a bank holiday in Other cities. One of them is Telangana formation day.

Telangana and Andhra Pradesh are Telugu-speaking regions. The Union of India joined These two states in 1948. Telangana was merged with former Andhra State to form Andhra Pradesh. Then again a movement for separation is started, Telangana becomes a new state on 2 June 2014. During separation, it was declared that Hyderabad would continue to serve as the joint capital city for Andhra Pradesh and Telangana for a period.

Use online Banking methods during a bank holiday in Telangana

There are various online methods by using which you do a transaction during a bank holiday in Telangana. Here is a list of few online options which you can use.

Internet Banking - Almost all the banks are providing internet banking or net banking option. This net banking provides a wide range of services where we can do transfer money using options such as NEFT, RTGS, and IMPS. Also we can enjoy services such as mobile recharges, DTH recharges and other options such as balance inquiry statements. Comparatively, we can get a better and more informatic statement using net banking than updating our passbook.

Mobile Banking - Mobile Banking is almost similar to it. We will be getting all the options which we can get using net banking. This method of doing banking is easy and a little handy comparatively. Not all the banks are providing mobile banking app there are few top banks which have not introduced mobile banking service yet. You can use your mobile browser to do the net banking in such case.

You can UPI for doing transactions on a bank holiday in Telangana. Few banks have developed a mobile application for UPI specifically. Few are including the UPI in the mobile app itself, and few are providing both. Either you can use it mobile banking app or UPI app.

Visit an Amusement Park in Hyderabad

For children or elders, Amusement parks are one of the best ways of spending a bank holiday in Telangana.

There are many Amusement Parks in Hyderabad which you can plan to visit during a bank Holiday in Telangana. Here is a list of Parks which you can visit.

Jalavihar is an amusement park located in Hyderabad. This park is within an area of about 12.5 acres. The park consists of two important parts one is for entertainment, and the other one is for doing party. In the entertainment zone, there are a lot of water sports, wave pool, dry rides, mini train and food courts. The other part which is party zone consists of open lawns which were built to accommodate about 2,000 people.

Wonderla is one of the leading amusement park designing and operating company in India. Presently there are three branches of Wonderla of one is in Banglore another one in Kochi and one in Hyderabad. Wonderla has more than fifty land and water-based rides which are suitable for all the people of any age. This park consists of other attractions as well such as laser shows, virtual reality show, roller coaster, and many more.

Telangana, on 2nd June 2014 become the 29th state of India. In Telangana, there is a lot of things to explore you can use bank holidays to explore this history and culture rich state. We are providing a list here. Don't miss these.

Charminar - The most popular place in tourist place in Telangana. Located in the heart of the capital city. This is a must visit place in Telangana. This Monument is situated on the bank of the Musi River. Charminar is surrounded by Laad Bazar and Makah Masjid which are one of the major attractions there.

Golkonda Fort - Golkonda Fort is an another place which you must visit. This place is situated eleven kilometers away from Hyderabad. This fort consists of four forts with a usual exterior boundary. Golkonda fort is of superior eminence in the history of Telangana with regards to Aurangzeb’s succession.

Nagarjuna Sagar - This dam is one of the visited sites in Telangana. It is not only just the large water reservoir or a dam there are few magnificent waterfalls which are still in their natural beauty. There are many more places in Telangana which worth a visit. Don't miss to witness the real beauty of these tourist places in Telangana.

Bhadrachalam - Bhadrachalam is a holy place in Telangana. It is Believed that this is the place where Hindu God and Goddess Rama, Sita and Laxman spend the years of their exile. Here we can find the ancient temples to see. The main attraction of this place is the road. Trees fully cover the road which makes the trip pleasant and a good idea to plan a road trip to Bhadrachalam on a bank Holiday in Telangana.

Hyderabadi Cuisine - Hyderabadi Biryani is famous all over India. Not only biryani but also there are many Cuisine which you must not miss to have if you are living in Telangana. On a bank holiday in Telangana dedicating a day for having one of these cuisines will be a delicious purpose.

Hussain Sagar Lake - Hussain Sagar lake is one of the man-made lakes in India. The gigantic statue of Lord Buddha is one of the best attractions in Hyderabad. Especially during night times, this place is a must experience thing during a bank holiday it is highly advised to visit this place if you are living in Hyderabad. Morning times you can go for boating in this man-made lake.