List of Bank Holidays in Karnataka 2016
Note: The 2'nd Saturday and 4'th Saturday of every month as public holiday for banks in India. 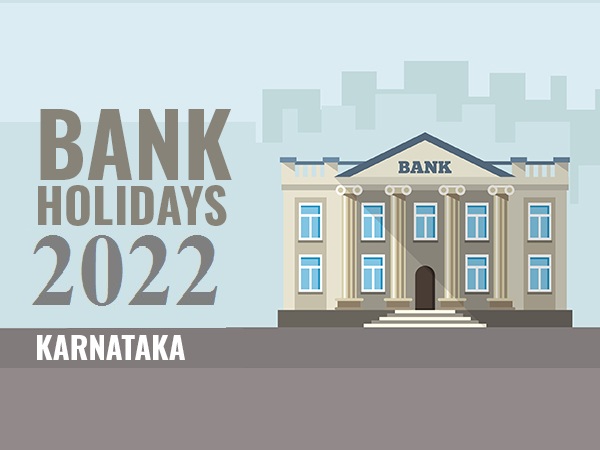 For every state in India, there will be few regional bank holidays. As we everyone know India is the country with a lot of religions and these regional holidays will be decided to depend upon the religious population ratio.
The following are the main regional and bank holidays in Karnataka:

Mahamastakabhisheka is one of the most popular and important fares conducted once in every 12 years in Karnataka.

The Mahamastakabhishekam will be conducted to the Bahubali Gommateshwara Statue which is located in Shravanabelagola. It marks an important Jain festival. It is one of an integral part of the ancient and composite Jain tradition which started way back in 981 A.D The last anointing took place during February 2018 and it was the 88th in the series and the second one of the 21st century. Many Jain ascetics will attend the event. The previous event which was held between February 17 – 25, 2018, took place under the leadership of His Holiness Sri Charukeerthi Bhattaraka Swamiji of Shravanabelagola.

Bahubali who was born as the son of Rishbhanatha was the first of the 24 Tirthankaras who are worshipped by the Jain Community. He is worshipped for living a simple life with exceptional qualities which he displayed during all his stages of his life (beginning from conception, birth, renunciation, enlightenment and salvation). The giant statue whose length is 58.8 feet is the most magnificent sculptural art. The statue stands upright in the posture of meditation which is known as kayotsarga. The statue is situated in Vindyagiri Hills. 21 types of Abhishekams will be performed to the idol. The rituals will be held as per the Digambar Jain traditions. The celebration involves smearing the idol with contents of 1008 pots carried by the devotees.

Karnataka, the state best known for its rich culture and capital city, Bangalore for silicon city of India is blessed with colorful life and people. The state is home to some of its Heritage destinations and its national and wildlife parks spread across the state. The hill stations in the state are also tourist attractions.

The state is home to country’s some of the biggest cities, emerging cities such as Bangalore, Mysore, Hubli-Dharwad, Belgaum, and Mangalore. The industries in the state and the big corporate offices makes it one of the biggest contributor to the economy and GST collection of the country. Karnataka is also home to some of the biggest tourist destinations in the Country.

Various other festivals are also celebrated with the same enthusiasm and devotion as the Ganesh Chaturthi. Festivals such as Kannada Rajyothsava, Christmas, Deepavali, Id-E-Milad, and several others. Karnataka is home to various cultures, religions, and languages.

Most of Hindu festivals are celebrated during the daytime, but Shivaratri is all about keeping a night-long vigil as it’s believed that Lord Shiva saved the universe from darkness and ignorance. In this Public Holiday people can visit the Hampi a place where the special attraction of the celebration was the insertion of the golden mask of Lord Shiva, studded with diamond, rubies and other precious stones, on the Shivalinga, being worshipped as Sri Virupakasha.

Special pujas were performed at various Shiva temples elsewhere in the district too. Hundreds of devotees visited temples and offered pujas. Night-long musical concerts are also organized at Sirguppa, Tekkalakota, Bellary and other parts of the Karnataka State.

UGADI: For the people in Karnataka state, Ugadi symbolizes the beginning of the New Year as per the Hindu calendar. It is a Bank Holiday 2022 in Karnataka.

A lot of preparations are carried out to celebrate the festival. The arrangements begin a few days in advance. People clean and wash their houses for the occasion. New clothes are bought to be worn on that day. To celebrate the spirit of Ugadi, several other items purchased and kept ready by the people. They make preparations for the particular cuisines to be cooked on the day.

Good Friday: Good Friday is national wide holiday. Karnataka government has announced Good Friday as a public Holiday and it usually falls in the month of April.

Ambedkar Jayanti is one of the Government Holidays in Karnataka in April 2022. Ambedkar Jayanti is celebrated every year by the people with grand enthusiasm more than like a festival on 14th of April. It would be the 131th birthday anniversary celebration in the year 2022 to commemorate his memories.

This day has been declared Government Holiday all over in India. Ambedkar Jayanti is celebrated with great enthusiasm all over India including Varanasi, Delhi, and other big cities.

Huge celebrations are held across the Karnataka state, and it was the day to pay homage to B. R. Ambedkar for his splendid contribution in preparing the Constitution of India.

Every year a special event is organized in his honor at the Parliament of India. At the event, prominent leaders pay homage to his statue. The celebrations include activities like dance, painting, debate, dramatics, essay writing, as well as sports.

In Karnataka, Basava Jayanti is known as a Government holiday on April 26, 2022. This date can switch from year to year, but it usually falls in late April or early May.

The holiday sees colorful parades in major cities of Karnataka, like Mysore, Mangalore, etc. During which portraits of Basavanna are taken through the streets. There are also organized seminars where his teachings are repeated and learned.

A flag is also raised at the Basaveshwara Statute in Jagat Circle, where parades may also pass by. The celebrations involve great jubilation and can last for three days.

Other Festivals in Karnataka

Mahalaya - Mahalaya is a Bengali festival. This a bank holiday in Karnataka and Bengal states. This is the first day of 16–lunar day period in Hindu calendar. when Hindus pay homage to their ancestors, especially through donating food.

2) Coorg - Coorg is also called as kodagu. Coorg is situated on the slopes of western ghats. This city is around 350 kms away from banglore. There are many places on the way to coorg one can visit. This is also a very good long weekend plan during government holidays in Banglore.

3) Ooty- Ooty is also called as blue mountains in southren India. Ooty is around 280 kms away from banaglore and this famous hill station is also the junction of Tamil Nadu, Kerala and Karnataka, three southern states of India. A great place during bank holidays in Bangalore.

4) Chikmagalur - Chikmagalur which is 250kms away from banglore is also one best long weekend spot to visit during public holidays in banglore. The mountains in Chikkamagaluru are the part of the Western Ghats and also it is the source of rivers like Tunga and Bhadra which is called as Tungabhadra.

5) Kotagiri - Kotagiri which is nearly 300 kms away from is also a worth place to visit during Bank holidays in Banglaore because of its largely unexplored terrain and soothing weather throughout the year.

Spend time with kids during a bank holiday in Karnataka?

Spending time with kids is very important, and on a bank holiday in Karnataka, one can spend a lot of time with children. There are many options to spend time like you can fix something together. If there is something to be set at home such as changing the car tyre of your car, dealing with some pipe leakage or anything it is important to do it with kids because they will learn how to use all those tools and also you can speak and share ideas while doing some mechanical work.

Long walks with children also work a lot. During a bank holiday in Karnataka do not miss to drop your kid to friend's house or some music class or anywhere and prefer to go by walk as by doing that you will be spending more time with your child.

Play the games which your kids play. Actually, in that way you can communicate more with your kid and also can help them to learn how to focus and to be patient and much more. Do not go for an indoor game. Always prefer to play some outdoor game such as football, volleyball, Cricket, etc. This will help you spend time with your kids as well as to do some excise on a bank holiday in Karnataka.

What all transactions one can do and cannot do on a bank Holiday in Karnataka?

Money Transfer - There are three methods of transferring money on the day when banks are open or closed. Though one cannot do NEFT (National Electronic Fund Transfer) or RTGS (Real Time Gross Settlement). It is possible to transfer money through three different methods on a bank holiday in Karnataka.

1)IMPS, (Immediate Payment Service) - By Using IMPS, one can send money 24/7. This service will not be closed on any kind of bank holiday in Karnataka. There are few charges for this service. It is better you check the charges before doing the transaction.

2) UPI (Unified Payment Interface) - Like IMPS UPI is also provided 24/7 service and this service will not be closed on any bank holiday in Karnataka. Even for UPI payment, there are few charges. But the charges or low when compared to IMPS.

Not only money transfer one can avail various banking services using ATM Machine. Though that day is a bank holiday in Karnataka or not.

How to pay bills during public holidays in Karnataka?

No need to worry about paying a bill during a public holiday in Karnataka. In this new era of the internet almost every bill can be paid online. Either it can be electricity bill or a credit card bill. Almost all the bills can be paid online.

There are multiple ways by using which you can pay bills online. Here are few:

If you want to pay electricity bill. Though it is a public holiday in Karnataka or not. You can pay it online on bescom.org. All you need to do is to visit the BESCOM website enter your Customer Identification Number. It will show up your bill. By using your credit card, debit card or net banking you can pay the bill. There are few charges which you may be charged as you are paying the bill online.

There is one more option to pay the bill that is by using a mobile wallet. By using mobile wallet such as Paytm you can pay the bill. This service can also be used anytime. Either it is a government holiday in Karnataka or not. The process is very simple and similar to bescom payment service. There will be an option where you have to select to pay electricity bill to enter your consumer number. It will show up the bill. To pay the bill here, you need to have cash in your mobile. If you have sufficient cash, you can pay through that cash or you need to pay using your debit or credit card.

Bank Holidays that are peculiar to Karnataka

Best Money Transfer Apps to use during bank holiday in Karnataka?

After demonetization, many apps were launched by which we can transfer money and also make payments. These apps will help you during a bank holiday in Karnataka. By using these apps, you will not need to withdraw cash for doing transactions and payments every time. Of all the apps which were launched here is a list of few apps which are best.

This first and the best part of Buddy app is you can use Buddy app in nearly thirteen languages. Though you are SBI customer or not, you can use the app. If you are not an SBI customer all you need to do is add money to the Buddy wallet and do transaction whereas if you are an SBI customer, you can directly link your Buddy app to your SBI account and directly use the money in your account to make payments. This option works even if it is a Bank Holiday in Karnataka.