Home  »  Aadhar Card  »  How to Link Aadhaar with NPS Account

The National Pension Scheme popularly known as NPS is a voluntary retirement scheme introduced by the government of India with an intention to promote savings amongst the salaried individuals towards the pension scheme which will yield benefit post retirement.

The scheme is designed to enable systematic savings throught out the work life of individuals.

How to link Aadhaar with National Pension Scheme online? 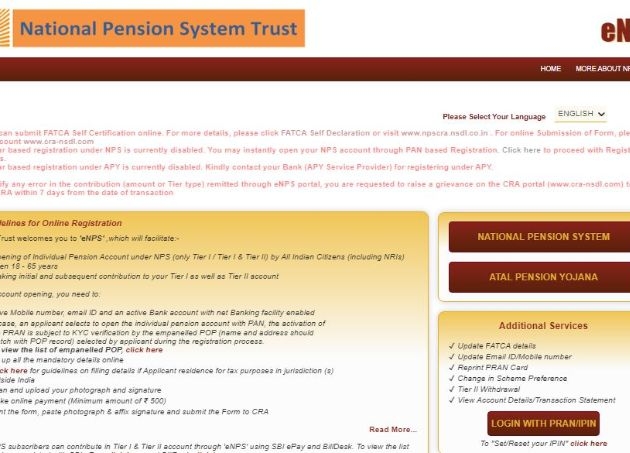 Points to remember while linking Aadhar with NPS

One has to keep the following points in mind at the time of linking Aadhar number with NPS Account:

The National Pension System or NPS is a voluntary pension scheme maintained by the government of India. It is similar to the Public Provident Fund (PPF) and Employee Provident Fund (EPF). As per this scheme, the maturity amount and the entire withdrawal amount is tax-free and does not attract any tax.

The National Pension System (NPS) is a voluntarily defined contribution pension system and is administered and regulated by the Pension Fund Regulatory and Development Authority which is created under the Act of Parliament of India.

The government of India on December 10, 2018, has made NPS an entirely tax free instrument in the country wherein the entire corpus is tax free at maturity and the 40% annuity also does not come under the tax bracket.

What is an NPS?

The National Pension System, popularly known as the NPS. It is a systematic retirement and savings scheme for the senior citizens backed by the Indian government that allows individuals to create a substantial amount of reserve during retirement. The NPS is administered and supported by the Pension Fund Development and Regulatory Authority -PFRDA, which has recommended its subscribers to link NPS Aadhaar.The Indian government introduced NPS in 2004 mainly for the benefit of government employees and the same was extended to everyone in 2009. A member under NPS must open a single NPS account in which he must deposit a minimum of Rs.6000 per month.Aadhaar being an important identity document and NPS being another crucial aspect of an individual's hard-earned money, the Government of India has taken the initiative to link the aadhaar card to the account of pension.

Why is it important to link Aadhaar with NPS account?

Q: Is it mandatory to make an NPS Aadhaar link?

ANS: Yes, it is obligatory. Under the amendment of PMLA - Prevention of Money Laundering Act, Indian government guidelines. Accordingly, all existing members under the NPS must also submit their Aadhaar, like their PAN.

Q: What are the tax advantages applicable under the NPS?

ANS: A tax benefit of Rs.50,000 is allowed in addition to the Rs.1.5 Lakhs benefit which can be claimed as a deduction under Article 80CCE of the Income Tax Act 1961.

Q: Can I withdraw the fund from the NPS account?

ANS: Yes, you can withdraw. A partial amount of 25% is deductible from the reserve for any crisis and retirement situation.

Q: What are the relevant documents to submit if I want to open an NPS account?

ANS: The documents below must be submitted for opening an NPS account: