In a major move to link documents with Aadhar Card, the government has initiated a drive to link aadhar with a ration card.

The ration card as a document is the oldest proof of residence used in India and linking it with aadhar will help to receive an array of benefits apart from preventing cases of fraud.

The linking of aadhaar with ration can be done both online and offline. 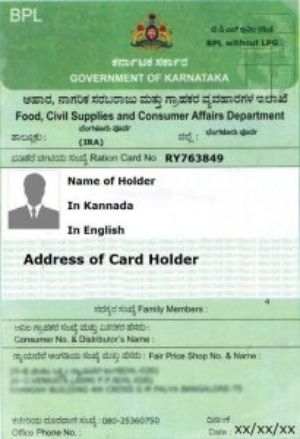 Follow the simple steps to link your aadhar card with ration card:

Follow the below-mentioned steps to link aadhar with ration card through online mode:

Ration Card is a document which is issued by the respective State Governments in India and it serves as a proof of nationality to the holders. It acts as an important document which serves as an identity proof and also indicates an individuals economic status. It is a voluntary document and is not a mandatory one for every resident Indian to possess one. The holders of ration card are eligible to purchase subsidized food grains from the Public Distribution System (under the National Food Security Act).

As per the National Food Security Act (NFSA), all the state governments in the country should identify those households which are eligible for purchasing subsidized food grains from the Public Distribution System and should provide them with ration cards. Currently, there are two types of ration cards under the NFSA.

Priority Ration Card – This type of ration card is issued to those households which meet the eligibility criteria as set by the respective state government. Each household is eligible to get 5 kilograms of food grains per member.

Antyodaya (AAY) – This ration card is issued to those households who are categorized as the “poorest of poor”. Each AAY households are eligible to secure 35 kilograms of food grains.

Note: Those who have a higher earning capacity as predetermined by the respective state government cannot obtain rations at a subsidized cost.

Here are the advantages of Ration Card Aadhar Linking :

The reasoning for the idea of having a Ration card in India:

ANS: No, it is not mandatory to link aadhaar to the ration card. It is mandatory only to avail services from the government.

Q: Is biometric control essential while making the aadhaar link of the ration card?

ANS: Yes this is a must as it will authenticate the details of you as the aadhaar holder and it will help to complete the ration card aadhaar linking process.

Q: What is a priority ration card?

ANS: AAY or the Antyodaya card is issued to families considered to be the poorest of the poor. All AAY families can get 35 kilograms of food grains.

ANS: No, it is not mandatory to link an Aadhaar to the ration card.

Q: Is biometric verification a must when making the Aadhaar ration card link?

ANS: Yes, it is a must as doing this will authenticate your details as an Aadhaar holder and this will help complete the Aadhaar link process of the ration card.

Q: What is a priority ration card? Does this mean that a person holding such a card does not need to link Aadhaar to a ration card?

ANS: The priority ration card is issued to those families who meet the eligibility condition established by the particular state government. According to this, each household is eligible to obtain 5 kilograms of food grains for each member. Priority ration cardholders can also link Aadhaar with the ration card, however, they will get the benefit only as set by the government.

Q: What is AAY- Antyodaya?

ANS: AAY or the Antyodaya card is issued to those families who consider themselves the poorest of the poor. All AAY families are eligible to obtain 35 kilograms of food grains from the state government.

Q: Can anyone get a ration card?

ANS: Yes, any Indian citizen can have a ration card.

Q: Which fields can be updated through the self-service update portal?

Citizens can update all the details mentioned on the Aadhaar card by visiting an Aadhaar enrollment center. You can update your name, address, gender, date of birth, mobile phone number, email, and biometric details in Aadhaar.

Q: Are there any criteria that must be met to request changes online?

ANS: If you want to change the address online, you will need to send a scanned copy of the proof of address. If this document is not accepted by UIDAI, the application will be rejected.

Q: Do I also have to send the application in a local language?

ANS: There is no problem regarding the language in which you are submitting your update request. You can submit the application in whatever language you are comfortable with.

Q: My mobile number is not registered with Aadhaar. What do I do now?

Q: Can I correct my Aadhaar details online even if my mobile phone number is not registered with the Aadhar card?

ANS: You must select the option to verify using an OTP through an unregistered mobile number. This feature is only available online if you have not registered your mobile phone number with Aadhaar.