The term KYC refers to the “Know Your Customer”.It is a process of a business which helps in verifying the identity of its clients and assess their suitability, along with identifying the potential risks of illegal intentions towards the business relationship, if any.

The Aadhar Card KYC is one of the basic yet compulsory processes which is essential for all the financial institutions and mobile connections. Since Aadhar card can be used as both identity card and address proof, one need not have to provide multiple documents under each identification categories. Aadhar Card is a small but effective document for this process.

Although aadhar card can be used as a KYC document, the entire KYC process will take a relatively long period of time to complete the due documentation process. The UIDAI has come up with E-KYC services, which can be used by the customer to go through the electronic verification of their identity and thus reducing the time spent on completing the process physically while opening a bank account or while applying for a new mobile connection or for opening a new trading account and so on.

The aadhar based e-KYC (an electronic form of Know Your Customer) is offered by the UIDAI. It can be used voluntarily by the aadhar cardholders as a means to authenticate and establish their identity. The e-KYC is the way of resident authentication which allows the Indian residents to submit the same as an address proof in the electronic mode to all the banking companies. As e-KYC can be submitted via an online platform, the need for physical document submission is negated.

As per the existing system, the UIDAI has made a provision for aadhar authentication through both online and paperless offline mode. 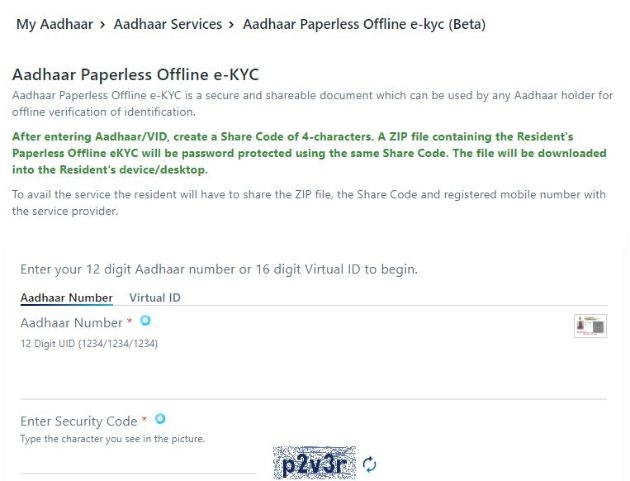 The term aadhar authentication refers to the process by which the aadhar number, the demographic and biometric details of an aadhar cardholder will be submitted to the Central Identities Data Repository (CIDR) for the verification purpose and such repository verifies the correctness or the lack of it thereof, based on the available information with it. The main aim of authentication is to enable the Indian residents to provide their identity for the service provider (for banks) to provide services and to give access to the benefits.

The following are the advantages of aadhar authentication/ e-KYC services:

The aadhaar paperless offline e-KYC will eliminate all the need for resident Indians to provide a photocopy of Aadhar letter and instead they can download the KYC XML and provide the same to the agencies who wanted to have his or her aadhar KYC. The aadhar KYC details are machine-readable XML which is digitally signed by the UIDAI and it allows the agencies to verify the authenticity and detect any tampering. The agency can also authenticate the user using their own OTP or face authentication mechanisms.

At the time of downloading or obtaining the offline e-KYC data, the following fields will be included in the XML. They include:

The Aadhaar Paperless Offline e-KYC data is encrypted using a “Share Phrase” which is provided by the aadhar number holder at the time of downloading and the same can be shared with the agencies to read KYC data.

The following are the advantages of using Aadhar e-KYC through offline mode.

How Does the Aadhar Offline e-KYC Work?

The offline e-KYC process is a convenient and easy way for the aadhar holders to provide their KYC details for authentication. As an aadhar cardholder, one can download an XML file and provide the same to the relevant requesting agencies. The XML is verified by the UIDAI and is tamper-proof, which further secures the data from either being shared or misused.

Those who already have an aadhar card can access their paperless e-KYC data by following the below-mentioned steps:

Step 1: Visit the official web portal of UIDAI
Step 2: Select the Aadhaar Paperless Offline e-KYC (Beta) option under Aadhaar Services
Step 3: Enter the 12 digit Aadhar number or Virtual ID followed by Security Code
Step 4: Select either Send OTP or Enter TOTP option, for verification purpose
Step 5: Now download the Aadhaar Paperless Offline e-KYC form
Step 6: Duly fill in all the required details as mentioned in the form and submit the same
Step 7: The relevant information will be available for download as an XML file, which will be digitally signed by the UIDAI.

The aadhar cardholder should first download the offline e-KYC data which can be shared with the relevant requesting agency either in the physical format or through digitally. The ‘Share Phrase’ has to be provided to the authority or agency at this time since the data is encrypted.

In the case of high-resolution copies, it is preferred to share the information via XML or PDF file format.

The term KYC stands for Know Your Client. It mainly deals with the process of a business verifying the identity of the clients and assessing the suitability. It also involves potential risks of illegal intentions towards the business relationship. It is more often used to refer to the bank regulations and anti-money laundering regulation which govern these activities. The process is also carried out by most of the companies in India irrespective of their sizes for all the purposes to ensure their proposed customers, agents, consultants, distributors and so on are anti-bribery compliant. Most of the banks, financial institutions, insurers, export creditors are increasingly demanding that customers should provide detailed due diligence information in KYC. The main objective of following the KYC guidelines is to prevent the banks and financial institutions from being used intentionally or unintentionally by criminal elements for money laundering activities. All the due related procedures will help the banks to better understand their customers and all the related financial transactions of their customers.

Q: How can residents raise the demand to request a reprint of the Aadhaar card?

ANS: The Aadhaar Reprint Order Request can be issued by visiting the official Unique Identification Authority of India(UIDAI) website by using a 12-digit Aadhaar number (UID) or a 16-digit virtual identification number (VID). The OTP / TOTP will be received on the registered mobile number. Alternative / unregistered mobile number. Also, you can download the Aadhaar card without OTP by using face authentication.

ANS: The SRN is a 28-digit service request number that is generated after issuing an Aadhaar order reprint request on the UIDAI website. It will be generated every time the request is issued, regardless of whether the payment was successful or not.

Q: What is the AWB number?

ANS: AWB(Airway Bill Number) is the tracking number generated by DoP(Department of Postoffice) i.e India Speed Post for the assignment/product they are delivering.

Q: Do we have the option to request a reprint of Order Aadhaar at a different address?

ANS: If you want to ship your Aadhaar reprint order to a different address, you must first update your Aadhaar information by visiting the nearest registration center or online through the SSUP portal.

Q: What is an e-Aadhaar?

ANS: e-Aadhaar protected with 8 digit password, which is digitally signed by the relevant authority of the UIDAI.

Q: What is the expiration period of the VID?

ANS: At this time, no expiration period is set for VID. The VID will be valid until a new VID is generated by the holder of the Aadhaar number.

Q: Will regenerating VID lead to the same VID or a different VID?

Q: Can an agency store VID?

ANS: No. Since the VID is temporary and can be changed by the holder of the Aadhaar number, the storage of the VID has no value. Agencies should not store the VID in a database or logs.

Q: In the case of VID, do I need to provide consent for authentication?

Q: Can Aadhaar be downloaded even if my mobile phone number is not registered with UIDAI?

ANS: No, your Aadhaar cannot be downloaded if your mobile phone number is not registered with UIDAI.

Q. What is a masked Aadhaar card?

ANS: This is the last option for citizens to hide their Aadhaar cards in the downloaded e-Aadhaar where the first 8 digits are replaced with characters like "XXXX-XXXX" and only show the last four digits of the Aadhaar number.

Q. Can I download my e-Aadhaar using a registration ID and virtual ID?

ANS: If you forgot your Aadhaar number, you can download your e-Aadhaar using the registration ID and virtual ID.

Q. Are Aadhaar Card and e-Aadhaar considered the same?